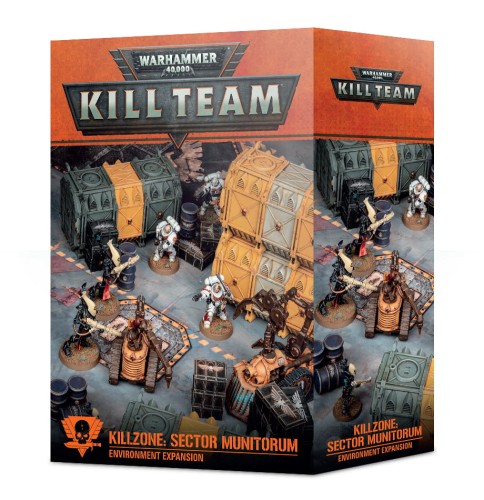 The immense supply districts known as Sectors Munitorum can be found across the Imperium of Mankind. They house the resources needed to power Humanity's vast armies: millions of tonnes of munitions, equipment, weapons, and fuel. Such priceless stockpiles draw the eyes of avaricious raiders, leading to brutal, close-quarter battles amidst looming canyons of rusted containers.

The Killzone: Sector Munitorum set gives you a complete Warhammer 40,000: Kill Team Killzone battlefield in a box. Youâ€™ll find a double-sided game board and a host of themed terrain that you can use to set up a stunning environment for your games.

This set contains everything you need to create a Sector Munitorum battlefield for games of Warhammer 40,000: Kill Team:

You will need a copy of the Warhammer 40,000: Kill Team Core Manual and the Killzones book to make full use of the contents of this set.

This set can also be combined with other Killzones, game boards, and terrain to create larger battlefields for games of Warhammer 40,000.